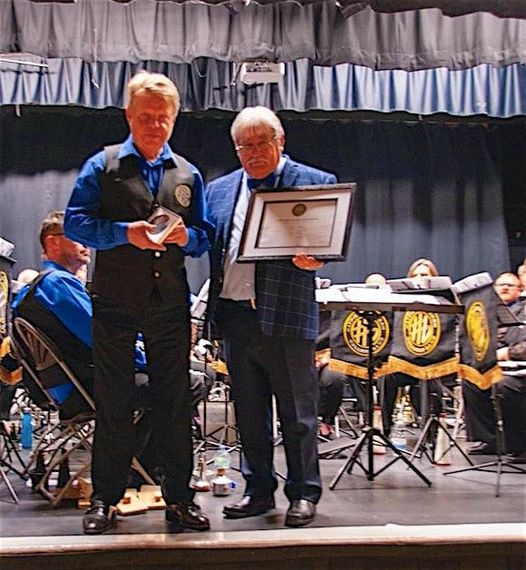 The Hatfield and Askern Colliery Band is sad to announce that Stan Lippeatt is to stand down from his role as the band’s Musical Director in May this year. Stan has, however, clearly indicated that “I’m retiring from day to day banding, yet will continue to be available as an adjudicator and to conduct on a freelance basis”.

Stan took over the baton of the band in 2013 from his good friend and fellow bandsman at Grimethorpe Colliery Band, the late Graham O’Connor, with the brief to look after “his band”. As such, Stan has rebuilt the band and expresses that doing so has been “a pleasure”.

Stan’s last formal concert with the band took place on Friday 25th March in a well-received concert at Hatfield Woodhouse, where Band Manager Dr. Robert Brown presented him with a commemorative ‘final concert’ programme, duly signed by all members of the band.

Stan’s final appearance with the band as MD, his last Stan(d), will be on the contest stage, when taking the band at the forthcoming Spring Festival. The test piece this year is Life Divine, a fitting swansong to his 62 years in the banding front line.

On behalf of the band members, back room staff and supporters of the band, Dr Brown said, “we owe Stan much gratitude for the hard work and dedication that he has put into the band, which has helped to progress and develop the band into the solid organisation it is today. Also, we thank Stan for many amusing moments which have helped lighten rehearsals and coach trips. We wish him continued good health and every enjoyment in his future banding endeavours”.

The band is now inviting applications for the position of Musical Director. Interested parties should contact Band Manager, Dr Robert Brown, on 07976 250624 or, via email to rob@hatfieldandaskern.band